skip to main | skip to sidebar

How I Learned to Think Math

If asked to sit down and reflect how I began to excel as a math student and math learner, and simultaneously as an engineering student, it would come down to three questions I began asking myself as I approached problems.  These are the three magical questions:

For almost my entire educational career, when I would stare at a problem I did not know how to do, I would blank out completely.   The resulting self image was the zero sum of self-confidence; if I did not know how to do the problem, I could not figure it out.  And that was that.  The inevitable zero score that results from this technique only served to reinforce what I already knew:   I could not figure problems out.  I could not think for myself.  I was not one those students.

Essentially what happened over time, was that these three questions developed into a tool that I trusted completely.  I believed that I had in me the ability to succeed, and these three questions were the method that guided me to my solution.  By the end of my educational career I would sit down and just dare professors to try and fool me.

Prior to my realizations about my own ability, the only problems I could answer were problems that I was directly taught to answer.  The difficulty was that once problems were tweaked even a small amount, I would be completely thrown off.  This resulted in high homework scores and low test scores.  Yet this a correlation we are told in school should not exist, we are alwasy told that if you do your homework you will do good on tests:  it's not true, and I was proving it false time and again.

I knew where to start on specific problems, but lacked a general strategy for all problems.  I believe teachers need to spend more time on crafting an overall problem solving strategy, and less on the techniques and repetitions of specific style problems.

I should note here that it was not until graduate school that I began to truly understand the power of the three questions technique I had been developing.  I attribute my delay to a couple different factors.  One factor is clearly that it is a different mindset for math that I had known growning up.  I was used to applying formulas to questions I could recognize as similar to the example problems, or lecture notes.

Another factor is that the questions are not as simply as they seem.  I am reminded of the person who says "pain is an illusion", and yet spends their whole life depressed.  It is one thing to know what these questions are, and it is another to internalize their meaning and apply them questions on your final exam.

Her is a bit more about how I think of the three questions:

1. What are they saying?
- This is difficult because we often do not read the question asked of us.  We simply skim it for form, and if it looks similar to something we have seen before, we go ahead and answer it as we have been taught.

2. What am I given?
- By explicitly training ourselves to focus on what is given, there is a much better chance that we record and process all the information in the problem and do not miss anything.

At least this is what helped me.  I believe it will help others. 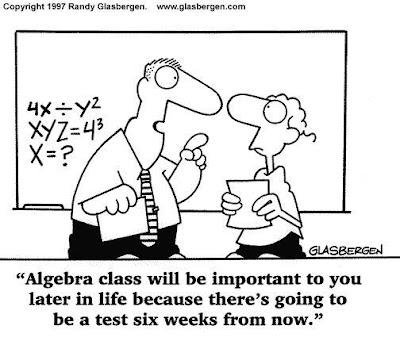 Email ThisBlogThis!Share to TwitterShare to FacebookShare to Pinterest
Labels: Comic

I have spent the last few months collecting a vast amount of great lesson plans from a variety of teaching blogs.  For this reason I will begin my own, in the hopes of adding a little something to the well of knowledge ever deepening thanks to online collaboration.

I will begin my student teaching in two months.  I intend to catalog my successes, as well as my missteps, in hopes of improving myself as a teacher, and become part of a larger online community of people sharing lesson plans, pedogy, and idea's.

Brian
I am a student teacher in Math. I have a Master's in Electrical Engineering, and spent four years as an Applications Engineer. I am also Co-Founder of Chords for Change, a non-profit that takes music and music therapy into homeless and domestic violence shelters.